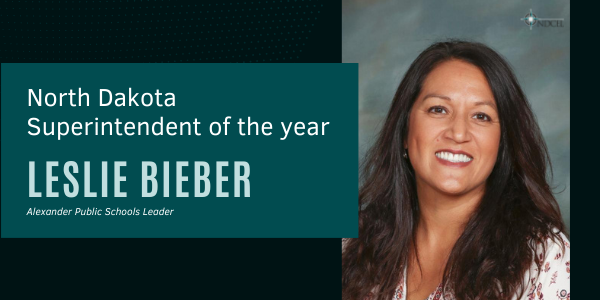 Leslie Bieber, Alexander Public Schools, has been named the North Dakota Superintendent of the Year by the North Dakota Association of School Administrators (NDASA), as part of the First Student, AIG Retirement and AASA —American Association of School Administrators (AASA) Superintendent of the Year Program. This program pays tribute to the talent and vision of the men and women who lead the nation’s public schools.

Leslie Bieber grew up in Sidney, MT and has lived in northwestern North Dakota throughout her education career. She has three adult children and has recently become a proud grandma of a grandson and granddaughter born within two months of one another. Family is very important to Leslie, and she feels blessed to live within 40 miles of family members.

Leslie is in her ninth year as the Superintendent of Alexander Public School District in Alexander, ND which is in McKenzie County in western North Dakota. She worked for one year as an Elementary Principal in Grenora, ND and a Spanish teacher for 13 years. As a Spanish instructor, she felt fortunate to teach Spanish to 26 rural towns in ND and MT and four state colleges in ND via interactive television network. She is proud of her time as an instructor and grateful that ITV and technology allowed her to teach up to six towns per hour and provide the opportunity of studying a foreign language to rural high school and college students.

Under her leadership as a Superintendent, Alexander Public School has experienced a 150% increase in student enrollment and 100% increase in personnel. The school buildings and grounds has doubled in

size with new construction and renovations to every aspect of the campus. Extracurricular activities, Career and Tech Education and STEM education have been introduced or returned to the district and

continue to expand. Academically, APS has maintained a 96% graduation rate with 70% of the graduates career, military and college ready. Throughout the rapid change in demographics and growth

however, she feels her greatest accomplishment is the inclusive atmosphere of the Alexander Comet family.

The ND Association of School Administrators and the North Dakota Council of Educational Leaders congratulates Leslie on this well-deserved achievement.