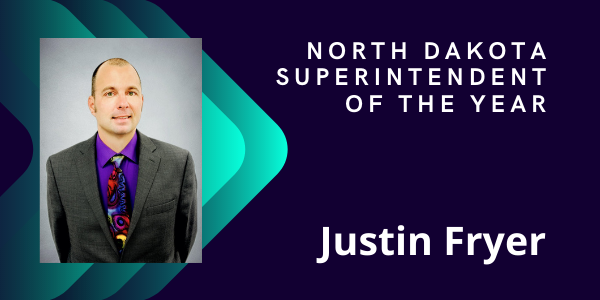 NORTH DAKOTA SUPERINTENDENT OF THE YEAR

Justin Fryer became the superintendent of Solen Public School District in July 2013. Before becoming superintendent, he served as an elementary principal, instructional coach, and 5th grade classroom teacher in Solen School District. Justin was born and raised on the Sisseton Wahpeton Reservation in the northeast corner of South Dakota. Justin earned both his M.S. in administration, teaching, and learning and B.S. in elementary education from Northern State University.

Early in his career Mr. Fryer worked as a classroom teacher in Somerton, Arizona. Justin's love of working with impoverished students guided his move to Arizona. While in Somerton, Justin worked as a first-grade teacher with EL students. This experience was significant and further developed a love to educate at risk students. Before taking a job in Solen, Mr. Fryer moved back to South Dakota to further his education and worked as a Hutterite colony schoolteacher for Faulkton Public School District. This teaching experience again provided an opportunity to work with at risk students and proved to be a unique cultural experience. Mr. Fryer has spent a significant amount of time during his career fighting for educational equity among impoverished students. Justin continues to proudly represent Solen Public School District and always looks to identify education initiatives that will benefit the children of Standing Rock.

Solen School District is located in Sioux County on the Standing Rock Indian Reservation in south central North Dakota. The school currently serves students in grades PK-12. Both Cannon Ball Elementary School and Solen High School operate within the school district. The schools are 100% Native American and all students qualify for free lunch. The patrons and stakeholders of Solen School District take pride in the school which serves as a "hub" for the community. In recent years, the school district has received many awards and accolades for improving Native American educational experiences. School leadership has used several competitive grants to completely rebuild the school district. The past seven years have been spent working with community stakeholders, NDDPI, and the Standing Rock Sioux Tribe to reconstruct Solen School District. According to Fryer, “serving an underprivileged population is very challenging work, but there is no greater feeling than making a difference for these students. All of our employees are deeply committed to this work and it has created a learning environment full of synergy.”

Beyond his work at the school district, Justin also serves his state as the Federal/Tribal School representative to the NDASA/NDCEL Legislative Focus Group, a ND K12 Statewide Strategic Vision Committee Member, and a ND State Superintendent Advisory Cabinet Member.

A must-watch video is found at the below link that highlights the many accomplishments that have occurred at Solen-Cannon Ball schools under the leadership of Justin Fryer.